It was just a routine checkup.

Crested Butte resident Jane Smith wasn’t expecting anything would come of it when she went for a mammogram screening. She felt fine and was having the best summer of her life, helping her favorite nonprofit — Tough Enough to Wear Pink, or TETWP — raise money.

The organization has raised more than $3 million for breast cancer prevention and to meet the needs of families battling the disease in Gunnison County.

Imagine the irony when a new 3D tomosynthesis mammography machine purchased by TET WP found something unusual during her screening. The very equipment for which she helped to raise funds flagged a suspicious lump.

Within a week, Smith — whose name has been changed in this article for sake of privacy — was back and forth to Denver three times and stayed in a hotel four nights, seeking the best information possible. It confirmed she had breast cancer.

The good news, however, is that it was caught in Stage 1.

“I had two different doctors tell me that if we did not have our 3D mammogram machine, this wouldn’t have been caught for another year,” Smith said. “It would have gone until it was much larger, such as in Stage 2 or Stage 3, and you’re much further down the path of things getting out of hand.”

What Smith learned following her experience is that women with her same circumstances will be able to receive an accurate diagnosis here at home with the addition of a new radiologist and equipment soon to be added at Gunnison Valley Health (GVH). 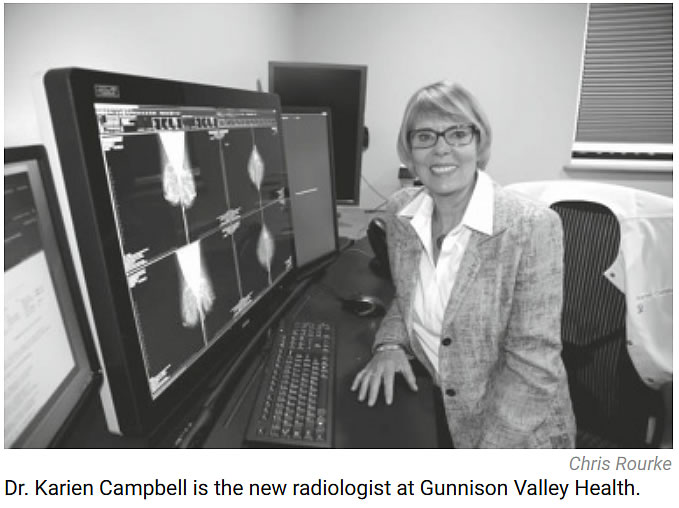 Enter Dr. Karien Campbell, a diagnostic radiologist with nearly 40 years of experience, who has come out of retirement to work at the local hospital. She began this past Monday, Sept. 30 — on the eve of Breast Cancer Awareness Month.

An immigrant from South Africa, Campbell conducted her
residency at the University of Alabama in 1995 to receive her
board certification then worked for Breast Imaging Center in
Albuquerque, N.M., beginning in 2002. She spent the last eight
years specifically focused on breast imaging.

Campbell planned to hang up her hat in Mt. Crested Butte,
until she met TETWP Executive Director Heidi Sherratt Bogart,
who coaxed her out of retirement.

“You cannot say no to that woman,” said Campbell. “Remodeling my new home was my retirement project. But now it seems to be Gunnison Valley Health.”

With the new equipment, Campbell said needle core biopsies can be performed on identified calcification in addition to other procedures that once required travel.

“I love what I do, and I love patients,” Campbell said, noting she celebrates with those who receive good news and assists those who don’t.

In addition, TET WP has donated $164,000 to pay for imaging equipment Campbell needs, with $80,000 going toward a breast “coil” which works with a magnetic resonance imaging scan to produce 3D diagnostic images of breast tissue.

“Tying GVH’s breast care service together is general surgeon and breast care prevention specialist Stephania Timothy and oncologist Paulette Blanchet,” said GVH spokeswoman Kylie Murgatroyd. “With TETWP’s support, together, we aim to deliver the highest level of excellence in physicians, equipment and services that rival anywhere in the nation.”

As for Smith, she will continue to show the same enthusiasm for her work with TETWP, despite her treatment. Her prognosis is positive, with the disease being caught in an early
stage.

“It will not define my life, but I’m going to be so much more motivated to help people,” she said. “We just have to keep doing what we’re doing.”

More importantly, she said, she’s on a campaign to see that women get their annual exams, noting prevention is key to successful treatment. Since learning of her condition, three friends told her they were overdue for their screenings and booked their appointments. “It was shocking to me locally how many people didn’t have a clue of the abilities of our hospital and what Tough Enough to Wear Pink offers,” said Smith. “Th ere’s no reason not to have a mammogram.”