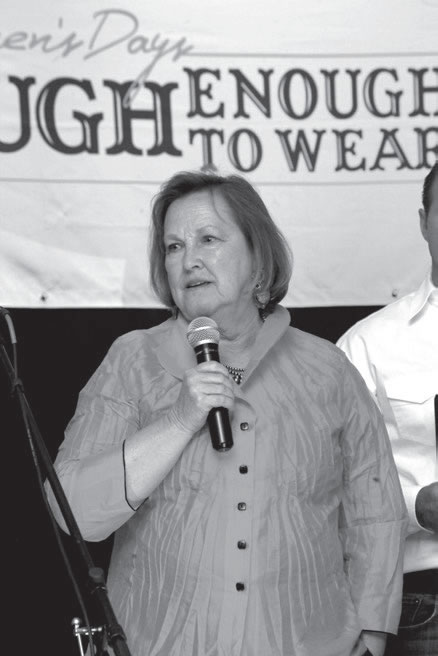 “Tough Enough to Wear Pink” is a common phrase when it comes to Cattlemen’s Days. As part of a national organization which was founded in 2004, local efforts are aimed at raising awareness about breast cancer and generating funds for breast cancer charities. Nationally, volunteers have raised $22 million and TETWP leaders have a goal of raising $50 million by the 20th anniversary. The local campaign has raised more than $1.6 million — money which stays in the Gunnison Valley. Those funds have gone toward various uses such as the purchase of medical equipment to aiding women in their fight against breast cancer.

The success of TETWP locally has garnered the attention of national organizers. The president and founder of the organization, Terry Wheatley, traveled to Gunnison this week to be a part of the annual fundraising festivities. The Times caught up with Wheatley to find out more about the organization.

Tell us how you founded Tough Enough To Wear Pink, and why.

When I was the senior vice president of sales and marketing for a very large wine company and we promoted pink wine. My son, Wade, was coming into the National (Rodeo) Finals that year … and I had just had my surgery and I just received a call from my daughter’s doctor and I thought what a better way to promote a pink wine than to do something at the National Finals Rodeo. I asked Wade, “What if we challenged all the cowboys to wear pink?” And he said, “That’s great Mom. But I don’t have a pink shirt.”

I called Wrangler and Karl Stressman (of the Professional Rodeo Cowboys Association), and he called their factories and … they had never done a pink shirt in the Wrangler lineup but they were coming out with one that spring so they were able to air freight shirts in. During the day I noticed … the announcers had pink shirts on, and the judges had pink shirts on and I thought, “This is great. At least some folks will be supportive.” And then the gates opened that night and I think it took the breath away for me, I think it astounded the crowd, and I think it hit a chord with the entire Western community. It’s just been gangbusters since 2004.

How is this fundraiser different?

In so many fundraisers, they say send the money (away). We said … find someplace in your community — you can do wigs, you can do gas money (for trips) for treatment, you can do overnight hospital stays. People keep their money in their own communities and the the community watches its money work.

What obstacles do you see to raising awareness about cancer prevention?

We have occasionally gotten the e-mail that says awareness doesn’t find a cure. I have answered them all personally. I am able to tell my own personal story and share that money is kept locally. I participated in a (benefit) walk in Chicago … and I got up and spoke … and (I said), “Here’s what you do. Tell your wife to get a mammogram. If you haven’t had one go get one. It’s easy. Go get one.” We all put it off . Maybe six months later a gal wrote me a note and said, “Because of TETWP and because you said everyone procrastinates, I went down and did it and they found a lump. It was early and they were able to remove it. And the doctor’s said it saved my life. And I believe TETWP saved my life.” For me to go back and tell those stories is that awareness saves lives because of early detection.

Why did you travel to Gunnison/Crested Butte to visit this year’s event?

Gunnison has always been the number one or in the top three fundraisers for Tough Enough to Wear Pink since it started. You guys here do so many things. I’ve always been proud of Gunnison — there’s just a special team of people up here. When the numbers rolled in from (Cattlemen’s) that first year, I said, “How many people are out there?” And I was told there was just a very responsive community here. Your Cattlemen’s Days committee every year has invited us. Lacey (daughter-in-law and TETWP director) and I sat down last year with the group. And Lacey said it was our No. 1 fundraising group and they represent the best, and she booked the tickets and escorted me right on the plane.