‘Grit, Guts and Gals’ celebrates the power of friendship 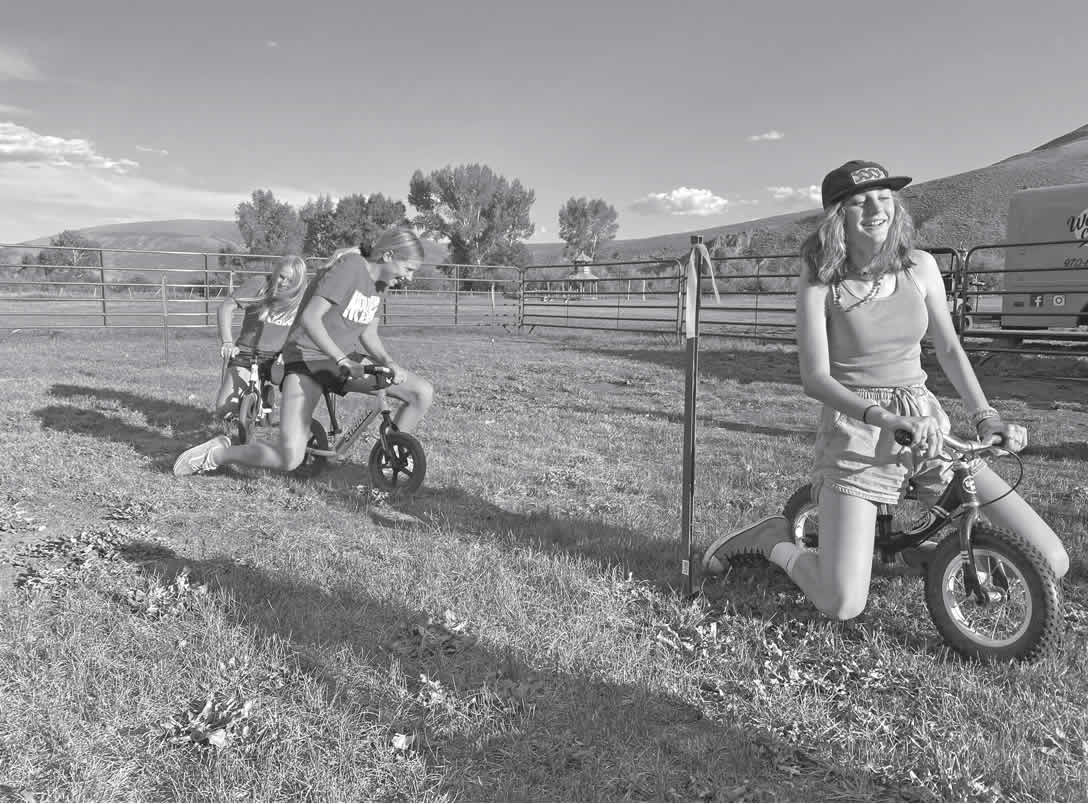 Atalaya Hausdoerffer, Emily Cattles and Ava Baeir use knees for pedals on Strider bikes at the “Grit, Guts and Gals” event at I Bar Ranch on Aug. 18.
This annual event is jointly organized by Cattlemen’s Days Tough Enough to Wear Pink and the gO Initiative.

Cattlemen’s Days Tough Enough to Wear Pink (TETWP) and the gO Initiative, two local nonprofits, drew around 400 people to the I Bar Ranch for their annual “Grit, Guts and Gals” event on Aug. 18.

This year’s gathering included a community bike ride, “bike rodeo,” Strider bike races, and a barbecue catered by 5B’s. The evening culminated with a high-energy show put on by the Goonies, a four-piece 80s cover band based in Boulder.

“The gO Initiative and Tough Enough to Wear Pink are celebrating strength, leadership, confidence, and community among girls and women,” reads the gO Initiative website. “The goal for this event is to unite our communities and encourage, celebrate, challenge, love, and support each other through fun, opportunities to laugh and be silly and, of course, dance to some rocking music.”

Ticket sales raised approximately $1,000 to benefit both organizations, said TETWP Executive Director Heidi Sherratt. But fundraising has never been the goal of the event, now in its fourth year.

“It’s more of a ‘fun-raiser’ and a way to connect the community,” Sherratt said. “And it brings awareness to both of our organizations.”

TETWP focuses on the fight against breast cancer, but its programs are open to people who are diagnosed with other types of cancer too. Since 2005, the organization has raised $4,392,000 for Gunnison Valley residents.

“The cool thing is that all the money raised in each community stays in the community it’s raised in and can be used however they see fit,” Sherratt said. “So, it’s really a unique national organization.”

The gO Initiative’s mission is “to educate, inspire and develop individuals of all ages and abilities in mountain sports by providing financial support and opportunities for a strong body and mind,” according to the organization’s president, Sarah Stubbe.

Its flagship program, the gOgirls/gOguys, is a Gunnisonbased mountain biking program for children ages 7 to 14. Throughout the summer, participants focus on skill development, bike safety, respect for the environment, physical and mental health, leadership, supporting each other, and giving back to the community. This summer, participants volunteered at Mountain Roots Food Project and the Gunnison Valley Animal Welfare League.

“It’s not about just riding bikes all the time,” Stubbe said. “It’s kind of a little bit of everything … If they can take one skill that they learned this summer and bring it into the school year, then that’s a success for us.”

The cost of participation in the 11-week summer program is $700. Participants meet twice a week, 9 a.m. to 3:30 p.m. Activities are organized by gender, with girls and boys riding in separate groups.

“The gOgirls was really nice, at least for me, when I started riding,” said Ava Baeir, a former gOgirls participant who attended “Grit, Guts and Gals” as a volunteer. “It was just really rad to ride with all girls … because usually in mountain biking, it’s mostly boys. But it’s kind of nice to have all girls.”

Sherratt and Stubbe, who founded the event, met waiting tables in Crested Butte and have been friends for over 20 years. They were inspired to organize “Grit, Guts and Gals” after their organizations participated in a Fourth of July parade together.

Sherratt said the conversation turned to the fact that gOGirls is teaching more than mountain biking.

“It’s about being a good friend, being a good girlfriend, being a good person in your community, and supporting each other and helping each other. And we were just talking about how it directly translates to someone going through cancer … Having the camaraderie of other girls cheering you on and being there for you and encouraging you and building you up instead of dragging you down, I think it’s so important.”

If you would like to donate to Cattlemen's Days Tough Enough to Wear Pink, visit our donate page or mail a check to PO BOX 375, Gunnison, CO 81230.