Gunnison Is Part of Rodeo History 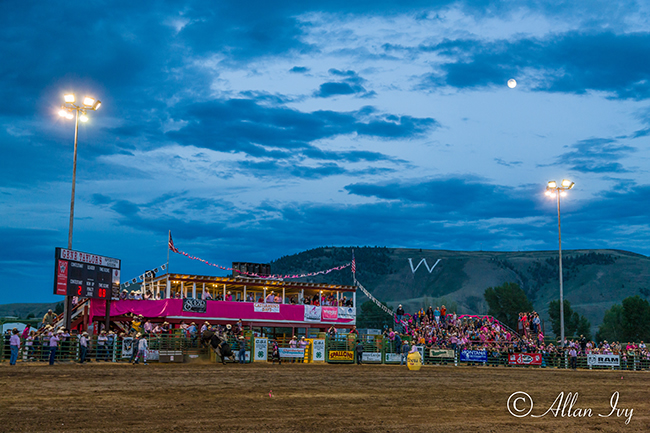 Gunnison, Colo., is home to Cattlemen’s Days, the oldest rodeo in Colorado and the longest continuous running rodeo in America. (ALLEN IVY PHOTO)

GUNNISON, Colo. – There is so much involved in the annual Cattlemen’s Days in this picturesque community that it takes months to plan and just a few days to pull off.

“It is Colorado’s oldest rodeo and the longest continuous running rodeo in America,” said Andy Stewart, the event’s rodeo announcer. “It’s part of history in a great ranching town. The people are wonderful, and the scenery is beautiful.

“It’s one of my favorite rodeos.”

And it’s all set for July 7-16 in Gunnison, and there are many reasons why it’s so personal for Stewart, nominated eight times for Professional Rodeo Cowboys Association’s Announcer of the Year.

“The livestock’s always great there, and Stace Smith does a great job of producing that rodeo,” Stewart said. “He incorporates other stock contractors into that rodeo to make it the best show he can.

“It’s also got the largest Tough Enough To Wear Pink campaign in the country by far. They raise more money than anybody, and they have a great Songwriter Concert and Auction in Crested Butte (Colo.) just a couple of days before the rodeo. They’ve set the standard in ProRodeo.”

The Tough Enough To Wear Pink campaigns began in 2004 and have encompassed many PRCA events across the country. Over the years, no other campaign has raised more money than Cattlemen’s Days, which raises in excess of $200,000 annually.

And that money stays local.

“One of our goals is to make Gunnison Valley Health the No. 1 rural hospital for breast cancer care in the U.S.,” said Heidi Sherratt Bogart, executive director of the local TETWP campaign. “Thanks to the vision and dedication of award-winning singer/songwriter Dean Dillon – as well as donors, sponsors and volunteers – TETWP has raised over $1 million to be used exclusively in this community.”

In fact, that number is nearing the $2 million mark.

“They just brought in a couple of the best surgeons for women and the equipment to the Gunnison Valley,” Stewart said, also pointing out some of the money has been used for a patient transportation RAM pickup to ensure patients reach their appointments safely and comfortably.

That includes the rodeo. Smith is an 11-time PRCA Stock Contractor of the Year, and much of that is attributed to the tremendous animal athletes mixed with amazing production. Mixed with world-class specialty acts, it’s the perfect fit for outstanding family-friendly entertainment.

Those acts include Keith Isley, six-time PRCA Clown of the Year and 10-time Act of the Year, and the Riata Ranch Cowboy Girls, who have been nominated three times for Dress Act of the Year.

“I love Keith Isley and look forward to working with him in Gunnison,” Stewart said. “He is just very talented and very professional. The Riata Ranch Cowboy Girls is high-powered and a very entertaining group of young ladies.

“It’s just an awesome event overall that does so much for all of Gunnison Valley.”