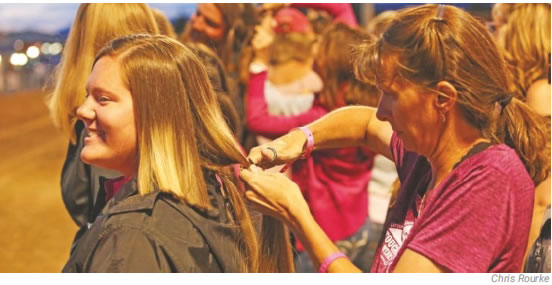 During Thursday night’s rodeo, women in the community donated their locks to Pantene’s Beautiful Lengths program for cancer patients who have lost their hair as a result of chemotherapy. Hair was cut by either local cancer patients or survivors. The event was one of several promoting TETWP.

With another Cattlemen’s Days Rodeo in the books, Tough Enough to Wear Pink (TETWP) is announcing a record of its own.

The nonprofit organization dedicated to breast cancer prevention and support for local patients announced this week that it has crossed the $3 million mark in fundraising. All money raised stays in the Gunnison
Valley.

“It feels like we have to set a new goal of $5 million. It feels really good,” said TETWP Executive Director Heidi Sherratt Bogart. “I have bigger hopes and dreams that are capital-campaign style. I’m excited about the success but there’s a lot more to do.”

Already plans are in the works for expanded services — including housing for those traveling for treatment — and the expansion of radiology specific to breast cancer detection and treatment with the hiring of a new physician at Gunnison Valley Health (GVH).

The organization’s biggest fundraiser occurs on Tuesday night of Cattlemen’s week with the Singer-Songwriter Concert and Live Auction. The event has been long-promoted by songwriter Dean Dillon and his wife Susie who have brought in big names from Nashville to raise money.

This year’s event featured Pam Tillis and Kendell Marvel. Combined with other events through the week, TETWP raised $370,000 this year.

One of the biggest developments for the organization this year is the hiring of a specialist in diagnostic radiology. Sherratt Bogart met Karien Campbell through a work-related project. When Campbell learned of Sherratt Bogart’s involvement with TETWP and the work underway locally, she was coaxed out of retirement to provide service through GVH.

The organization is now looking into funding specialized equipment for Campbell to use.

“Dr. Campbell is that very special physician who has not only dedicated her work to women’s imaging but totally embraces personalized care and truly appreciates the relationships she has guiding women’s health,” said GVH Chief Executive Officer Rob Santilli about the addition. “Add to that her incredible warmth and it is as though she has a secret potion that draws you in.”

TETWP also has established housing for patients traveling for cancer treatment. Through a donation by Norman and Dorothy Eastwood, Lucy’s House is the name of a fund
designated to help all cancer patients — not just those battling breast cancer — who incur expenses for lodging while traveling to out-of-town appointments. The fund helps to cover hotel rooms or rental homes.

“This is never covered by insurance and can be quite expensive for people,” said Sherratt Bogart. “This will also help them to be able to not push themselves to drive super early or late or in bad conditions, to stay and heal and relax after treatments and surgeries.”

Norman Eastwood fought Stage four throat cancer. He and his wife realized the benefit they had in being close to his cancer treatment center in Dallas. They wanted to offer the ability for others to do the same, if only temporarily.

“Through TETWP, Lucy’s House will provide a place to stay close to treatment centers, so that instead of driving, more time can be spent healing,” said Dorothy Eastwood, whose mother is the namesake for the program. “We hope you will share our enthusiasm and join us in supporting ‘Lucy’s House.’”

Our TETWP Concert and Rodeo in July is looking highly doubtful given County health orders and restrictions.

We are hopeful that we can get everyone together in a safe way to enjoy the TETWP family. We will relay the final decision and our other planned smaller events as soon as we get a viable plan so that we can celebrate together soon.

Cancer does not stop because of COVID and neither will we!